On our recent, marvelous month in Vietnam, we traveled down the coast from Hue to Hoi An to Nha Trang, and then inland to Dalat, on our way to the Central Highlands- the place we love the best, as it's the closest to Dan's heart from the time he spent there with the Montagnards. So from Dalat, we continued inland and north, to the Buon Ma Thout area in the Central Highlands, in great measure to ride an elephant- something we'd been wanting to do since we didn't get to do it in Vietnam back in 2008! After doing lots of research on the internet, I booked what turned out to be an excellent (and very affordable) three-day excursion, including lodging, with Mr. Chinh of Happy Travel Company, a highly-rated tour guide for the Buon Ma Thout area. We emailed back and forth, and I told him our interests were basically riding elephants, enjoying delicious Vietnamese food, and tasting and learning about the world-famous Highlands coffees, and he designed a terrific three-day tour for us! (We gave him 5 stars on TripAdvisor!)
We thought about taking the bus from Dalat, but given all our luggage and that it's quite a long trip, we decided in the end to spring for a private taxi, and we were glad we did! Curtis King, musician and railfan extraordinaire in Dalat, whom I wrote about in my last post, helped us find a great car and driver, and so we got to relax in air-conditioned comfort and enjoy the beautiful scenery, and arrived rested, as opposed to stressed-out, and met Mr. Chinh's associate, Mr. Loc, exactly where he said he'd be: opposite the Post Office right outside Buon Ma Thout! 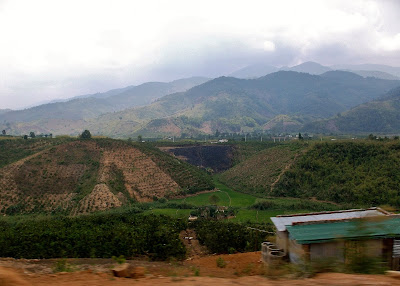 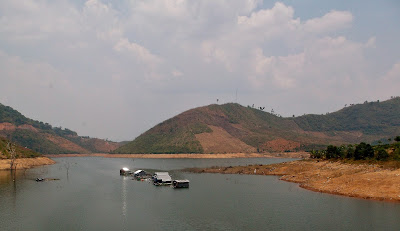 After we checked into our "M'Nong Long House" at the Jun Village resort on Lak Lake, we enjoyed a truly delicious lunch, watching the elephants stroll by! The traditional Highlands "Long House" is a raised, communal house with "his and hers" ladders out front, and it is a striking architectural symbol of the Central Highlands. The one we stayed in was designed for tourists, with indoor bathrooms, and lovely beds with pretty covers and romantic canopies, and for me it was like an up-scale blast from my youth hosteling past! 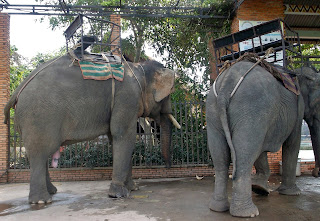 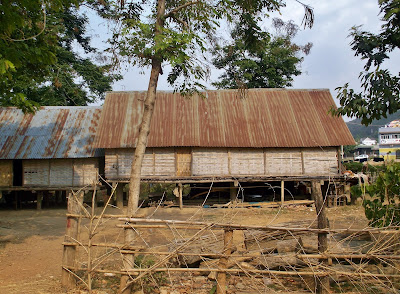 After lunch Mr. Loc took us for a fascinating walk through the nearby "Ethnic Minority Village" and market, where we bought some of the local hot pepper, a specialty of the area... 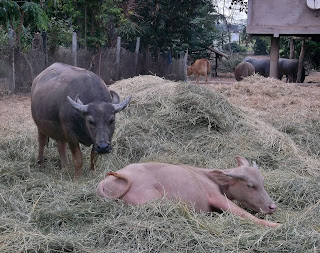 At dusk we found ourselves on the beach, and got to see a presentation of the traditional Highlands "gong show" and village dances, and drink "jar wine"! :-) 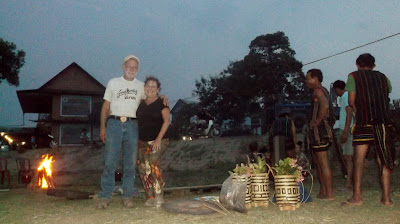 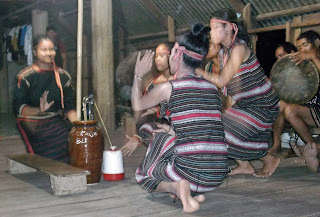 Then we joined Mr. Chinh & Mr Loc for a delicious dinner at Mr. Chinh's home, and finished up the evening sitting on the steps outside the house, watching the children play, and finishing off the last of the (now diluted) jar wine! :-) 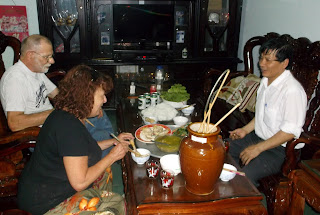 The next day we got up early and rode elephants around gorgeous Lak Lake- truly one of THE highlights of our whole trip! 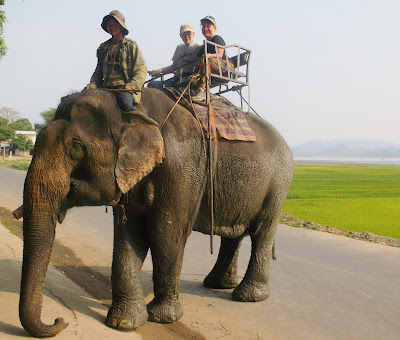 You see everything from a Totally different perspective when you're up high on an elephant! Their slow and stately gait, as they lumber, surefooted, down the paths and through the lake, give you time to take it all in, and it's amazing! The young man who guided our elephant was gentle, and basically just sat on him- he never struck the elephant or upset him in any way. All the elephants were well cared for and were calm and gentle, and it was truly a wonderful experience! 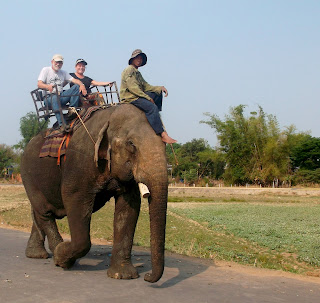 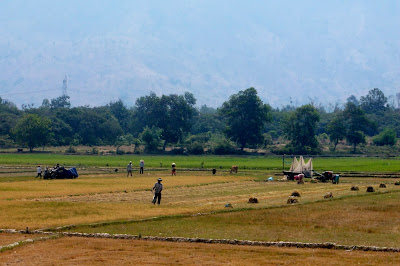 After our elephant ride it was time to head towards Buon Ma Thout, and Mr Chinh stopped at Love Mountain so we could hike and climb to the very top for good luck! There is a Vietnamese love story associated with the mountain, and with us old "Second Honeymooners" being in love, it seemed like a good idea when Mr. Chinh suggested it! For me, that climb was One Tough Mudder, but with help from Mountain' Climbin' Dan and Mr. Chinh, I made it to the top!


And then it was time for coffee! Vietnamese coffee from the Central Highlands is truly some of the best in the world, and we have loved it ever since we "discovered" it back in 2008! The most famous, Trung Nguyen, not only now has a "Coffee Village" and Museum in Buon Ma Thout, they have 100s of fab, elegant coffee shops around the country that put Starbucks (or Stardrecks, as I call them) to shame! You can not only enjoy a variety of their coffees and treats from their extensive menu in delightfully elegant, European-style cafes, but you can also have a great selection of coffees ground to order- which we did! On this part of our excursion we were joined by two Vietnamese tourists from Hanoi, and Mr. Chinh first took us to the famous Trung Nguyen Coffee Village and Museum where we explored the museum's extensive collection of traditional Highlands artifacts.
To actually taste and buy coffee, however, he took us to several other special places, including Redlands, where we met with the Director, and had both their coffee and the Reishi Mushroom Tea from the mushrooms they cultivate... 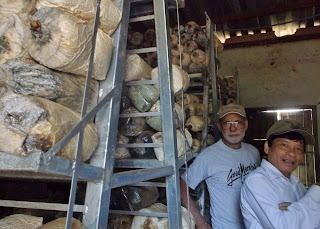 We stopped at a coffee plantation and learned about the different kinds of coffee, and how and where it's grown and blended;  several varieties of coffee are grown in Vietnam, including Arabica, Robusta, Chari (Excelsa), Catimor, and some indigenous varieties of Arabica such as the Arabica SE. Vietnamese coffee producers graft and blend these varieties for different flavor characteristics and balance. In and around the plantation we found a bunch of "funeral money", which looked so much like Real US Dollars that I literally started gathering it in the road! This is also where Sgt. "Clark Bar" Dan taught me how to make the crickets stop chirping and make the forest go totally silent... :-) 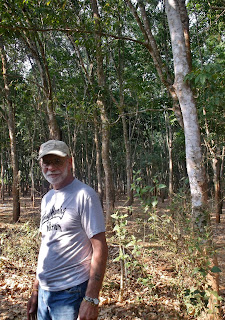 Then Mr. Chinh  took us to a small, special coffee emporium, where we enjoyed a tasting of the famous ( and exceedingly expensive) weasel (civet) coffee - cà phê chồn - which we bought to take home, of course! 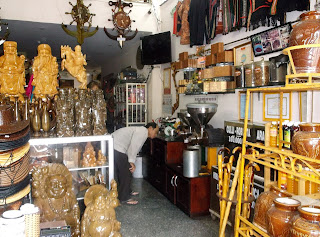 Then we went to  Kien Cuong, where we enjoyed another coffee tasting, and saw how they actually raise the happy weasels who make their famous coffee! Civet (weasel) coffee sells for $3000 a kilo! And yes, the weasels ingest and then poop out the coffee beans... LOL (My first thought upon learning about weasel coffee a few years ago was: "I wonder how this started?" I mean- who was that first amazing person who decided to try making a nice, hot drink from the coffee beans he found in weasel poop... and then convinced his friends to join him: "This is SO great, guys- you just HAVE to try it!")

Historically, civet, or weasel, coffee dates from around 1830, and began in Indonesia, after the Dutch established coffee plantations on the islands of Java and Sumatra, but prohibited the native farmers and plantation workers from picking coffee fruits for their own use. The farmers wanted to have a taste of the famed coffee beverage, however, and soon learned that certain species of the musang or luwak (Asian Palm Civet) consumed the coffee fruits, but left the coffee seeds undigested in their droppings. The natives collected the luwak's coffee seed droppings, then cleaned, roasted, and ground them to make their own coffee drink. The fame of aromatic civet coffee spread from locals to Dutch plantation owners and soon became their favorite, yet because of its rarity and unusual process, the civet coffee was expensive even during the colonial era! The science behind weasel coffee (yes, there is real science involved, too!) is that the seeds of coffee berries are eaten and pooped by the Asian palm civet (Paradoxurus hermaphroditus), and that this improves coffee through both selection and digestion. Selection is a little iffy, as it means the civets are choosing to eat coffee berries containing better beans. Digestion seems a little more likely, in that the civet's digestive mechanisms are supposed to improve the flavor profile of the coffee beans that have been eaten. The civet eats the berries for the beans' fleshy pulp, then in the digestive tract, fermentation occurs. The civet's protease enzymes seep into the beans, making shorter peptides and more free amino acids. The proteins are also involved in non-enzymatic Maillard Browning reactions reactions brought about by roasting. And while inside a civet the beans begin to germinate by malting, which also lowers their bitterness. Passing through the civet's intestines, the beans are then pooped our with other fecal matter and collected- by trained Civet Pooper Scoopers. (!) Although this was originally done by collecting feces from wild civets, civets are now raised commercially expressly to poop coffee beans, and the ones we saw were pretty happy, lazy critters!


After drinking enough coffee to stun an ox, we stopped for a really delicious, multi-course lunch on the road... 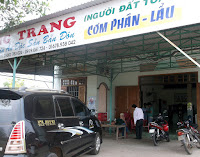 Thanks to Mr. Chinh, we got to experience a truly extraordinary part of Highlands culture and history, for he also took us to the grave, and then the home, of  Ama Kong, "King of the Elephants", and the last Elephant Tamer of the Central Highlands, who died in 20012 at the incredible age of 102! We were able to go inside Ama Kong's traditional, M'Nong raised house in Buon Don Village, and to see photographs, memorabilia he was given, and the tools he used to capture and tame the elephants. We then went to the herb store in his village where they sell the herbs and famous herbal tonic that enabled him to have kids in his 90s! And yes, we bought some, as well as his herb liqueur! :-) We also got to visit his grave, which is adorned with wonderful sculptures of peacocks and elephant tusks ... 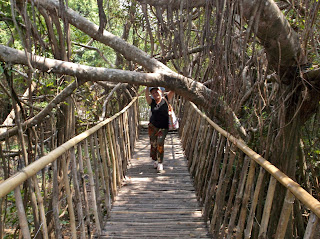 Our final stop of the day was to visit the DrayNur Waterfall, which was truly and wonderfully dramatic (and WAY better than Prenn! LOL), and then trek up to have a coffee at their cafe that's literally at the end of the universe! 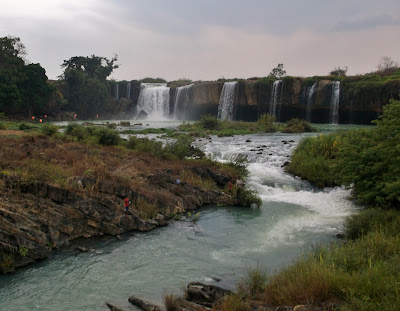 For our two nights in Buon Ma Thout, Mr. Chinh arranged for us to stay at the 3-star Dakruco Hotel, which was pleasant, centrally located, and offered a nice breakfast- and the local specialty liqueur at the desk, which we had to buy, of course!
When Mr. Chinh learned that we were heading to Kon Tum, he not only helped arrange a car and driver for us, but also set up our reservation at the Indochine Hotel, Kon Tum's top hotel, which cost us only $35/night! We had a great time, and Highly recommend Mr. Chinh and Happy Travel if you are going to the Buon Ma Thout area! 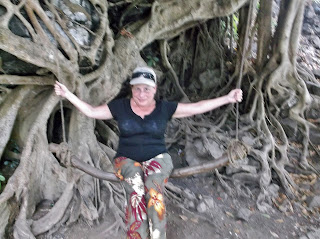 Vote for us on Picket Fence!

Promote Your Page Too